Published on November 13, 2019 by the FairShake Team

Here’s why you have so few options for cable, internet & phone providers…

Picture this: You just moved into a new house or apartment, and it’s time to get your internet hooked up in your new place.

You’re a savvy shopper, so you figure you’ll look around at some different options, see what competitively priced packages different providers are offering in your area.

But, if you’ve ever tried to shop around for a good deal on home internet services, cable, or a home phone line (remember those?), you probably know where this story is heading: Frustration, disappointment, and disbelief when you discover that comparison shopping for internet plans isn’t really an option for you.

If you’re lucky, maybe you moved into an area where you have two companies to choose, which is hardly much of a choice at all. And for over 40 million American households, there’s just one company in their area providing high-speed internet service. It’s the same for cable, phone service, and other important utilities.

This is the United States of America, not the United States of Comcast or AT&T. But when you’re shopping for an internet service provider or a new cell phone plan, it doesn’t always feel that way. Many consumers complain about feeling like they just don’t have a lot of options for these services, and their complaints aren’t unfounded — in a lot of places, there really are only one or two companies providing phone and internet service.

Have you ever stopped and asked why it is that way? When other industries are filled with different companies and options that create competition, keeping prices low and giving consumers plenty of choice, why isn’t that the case for cable companies and other telecom businesses?

The answer to that question is pretty complex, but we’re going to do our best to explain. It has to do with multiple factors, but it all traces back to a major piece of legislation that helped shape the entire telecom industry as we know it.

Enter: The Telecommunications Act of 1996

In the 1990s, the telecommunications industry was still largely being governed by a law that was enacted in 1934 — 62 years earlier. Suffice it to say telecom regulations were pretty out of date when you consider that between the ‘30s and the ‘90s, we switched from communicating by telegraph and radio to having TVs and phones in virtually every home. Plus, the internet was becoming more commonplace. As were cell phones. The times were a-changin’.

But first, the Bell Telephone Monopoly

An important piece of historical context to know about is the Bell telephone monopoly. All the way back in the 1880s, Bell Telephone Company—originally incorporated by Alexander Graham Bell’s father-in-law and focused on selling and leasing telephones themselves—had a vision for the future of communication in the U.S.: A long-distance telephone network that would span the entire nation and allow people to make phone calls anywhere in the U.S. from their home phones with no special equipment needed.

Through the lens of 2019, with our 5g networks and satellite technologies, a nationwide network may not sound like a big deal. But in the 19th century, this meant that Bell had to build all the infrastructure from scratch. It took around a decade before a long distance network reached from New York to Chicago. From that point, there was no stopping this new technology, and it soon spanned the country just like executives at Bell had envisioned. The company created a new branch for this new service, called American Telephone and Telegraph Company, or, as you might recognize it, AT&T. 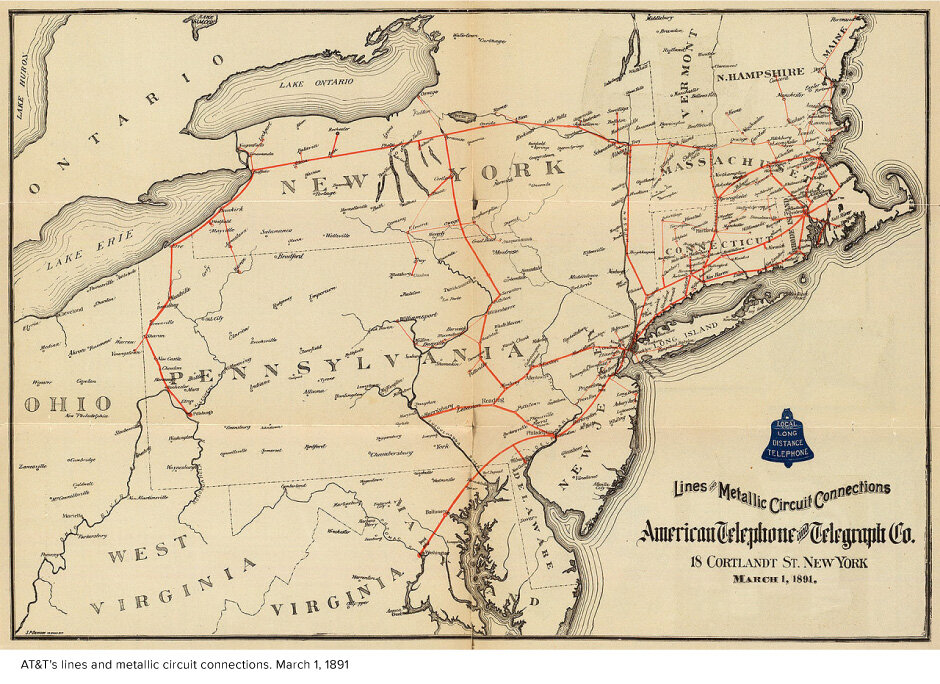 And so, up until the 1980s, Bell/AT&T owned all the infrastructure for the entire long-distance phone system in the U.S. This meant, if you wanted to be able to make a long-distance call, you had to use AT&T for your phone service.

But, eventually, leaving nationwide communications services in the hands of a 100-year monopoly didn’t sit well with the federal government. So, in 1982, the U.S. Department of Justice ordered the company to split up. AT&T was allowed to keep operating its long-distance phone service, while the Bell Telephone Company was split into seven regional companies (the “Baby Bells”) that would provide phone services to different parts of the country.

How the Telecommunications Act of 1996 was supposed to affect consumers

Still with us? That’s a lot of history, but it’s all important.

Back to the Telecommunications Act of 1996. It came pretty much on the heels of the breakup of the Bell monopoly, and it was definitely inspired and informed by that case.

The Act’s main goal was to free up competition in the telecom market by removing a lot of government regulations but it added some new regulations, too, mostly designed to prevent more telecom monopolies from happening.

For instance, a news article from the time says the bill’s sponsor believed that “new competition from telephone companies and satellites had ended the need for price regulation” in the cable industry. “There were abuses by the cable companies,” said Senator Larry Pressler of South Dakota. “But we’re now at the point where we can deregulate.”

The bottom line is that the law was intended to create a more open telecom industry that would encourage competition, prevent monopolies, and create an industry with low prices and high-quality service driven by free and healthy competition within the market.

But, as anyone who’s had to call their cable company to fight with a representative about their yearly rate hike knows, that’s not exactly what happened…

How the Telecommunications Act of 1996 has actually affected consumers

For the purposes of understanding how this affects our phone, cable, and internet choices today, we’re going to focus on two parts of the law, one of which added a new regulation to the telecom industry, and the other of which further deregulated the industry.

First, infrastructure was opened up

A major change that the Telecommunications Act of 1996 made was requiring telecom companies to share their infrastructure. That means that once a company creates the phone lines that reach homes in all corners of the country, new companies can sort of piggy back off them and start offering services using that same infrastructure.

This removed a major barrier for new telecom companies: Creating all that infrastructure is really expensive. This new regulation was designed to make it easier for smaller companies to enter the market without facing huge upfront costs.

Then, merger and acquisition rules were relaxed

Another big change that came with the Telecommunications Act of 1996 is that the federal government relaxed rules and regulations it previously had in place around mergers and acquisitions within the telecom industry.

This was a decision that was made in the same spirit as ending the Bell monopoly. Those who are in favor of deregulation say that when the government stays out of business, it allows the free market to work and competition will naturally arise. When there’s competition in the market, that naturally keeps prices low and service quality high. That was the idea, but again, not exactly how this ended up working out.

So how did the Telecommunications Act of 1996 actually affect consumers? Not exactly how lawmakers thought it would.

After the law was passed and implemented, it allowed those seven regional companies the Bell Telephone Company had split into to start offering long-distance service, both within their own regions, and nationwide on AT&T’s infrastructure to create some competition for AT&T. So far, so good.

The seven regional phone providers that had come from Bell now looked like this. 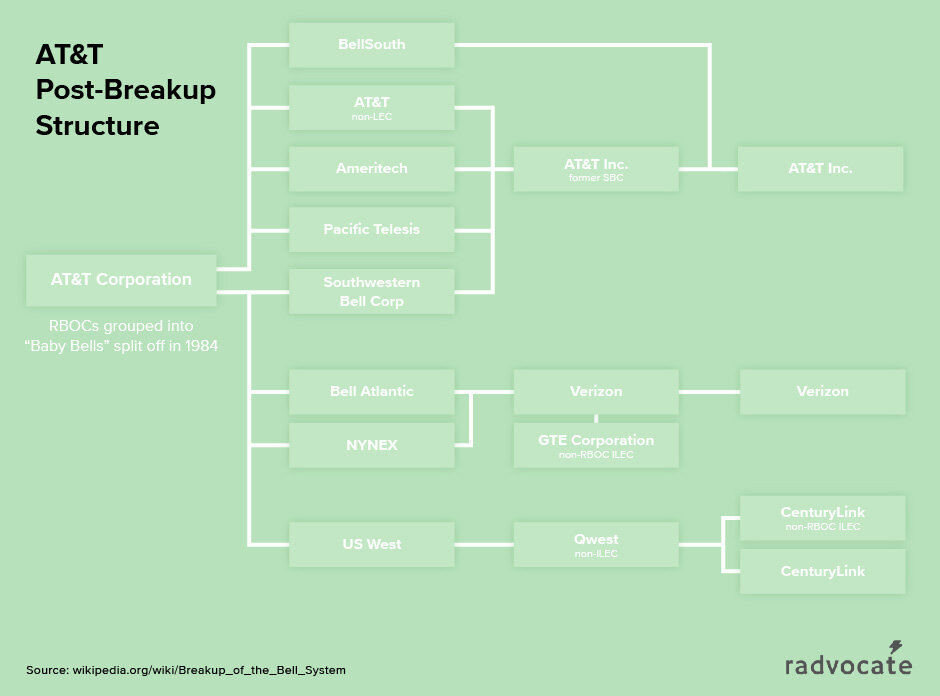 And that’s basically how things stand today. All those mergers left the lion’s share of phone service in the hands of AT&T, Verizon, and CenturyLink, and in 2019, if you want a hard-wired home phone, those are still pretty much your options.

What does this have to do with cable and internet?

The changes that the Telecommunications Act of 1996 made to the phone industry also applied to cable, and home internet service, which was really rising to prominence around that time. Cable TV and broadband and DSL internet service use the same infrastructure as phones, so a lot of the time, the companies that offer those are leasing use of that same cable network that belongs to AT&T.

And just as deregulation prompted regional phone companies to merge together, cable and internet providers have followed suit.

Smaller companies merged and got acquired, creating giant providers that are still continuing to consolidate. For instance, in 2018 AT&T acquired Time Warner, even after the U.S. Department of Justice filed a lawsuit trying to block the deal. And it even has spread outside the US: that same year, Comcast and 21st Century Fox had a bidding war over which would acquire British cable company Sky.

These giant mergers are largely the reason your utility options are so limited, despite the fact that the Telecommunications Act of 1996 tried to create more competition in the industry.

As the telecom industry changes, laws need to be updated

The telecom industry is still rapidly changing, especially when it comes to internet service and mobile phone use. Broadband and DSL services, which utilize all that old phone infrastructure, are still widely used in homes, but that won’t always be the case. Next-generation wireless networks based on 5G are being deployed now. Fiber internet is becoming the standard in newly built homes and buildings. The one thing that has stayed constant in the telecom industry for as long as it’s existed is that the technology is always changing.

The Telecommunications Act of 1996 is nearing its 22nd birthday, and lawmakers have already had serious discussions about updating or replacing it. As they look toward the regulatory needs of the telecom industry in the future, though, they’re much more focused on the internet rather than the phone and cable services that were central to the 1996 Act.

“First, we need to modernize our communications laws to facilitate the growth of the Internet itself,” South Dakota Sen. John Thune, a major proponent of updating the 1996 Act, said at the 2019 State of the Net conference in Washington. “And second, we need to update government policies to better reflect the innovations made possible by the Internet and other digital technologies.”

How that might affect consumers’ lack of choice when it comes to providers (for internet, but also for cable and mobile phone service) is unclear. In a deeply partisan Washington, it’s not easy to predict what Congress might decide if it does update or replace the Telecommunications Act of 1996.

For now, it looks like consumers are stuck with the way things are. It would likely take new regulations from the federal government to undo what the Telecommunications Act of 1996 has done to the industry, and lawmakers seem unlikely to step in anytime soon.

Have You Been Sold a Faulty Product? Here’s What to Do.