These Are the Most Important Consumer Rights Laws in the U.S. 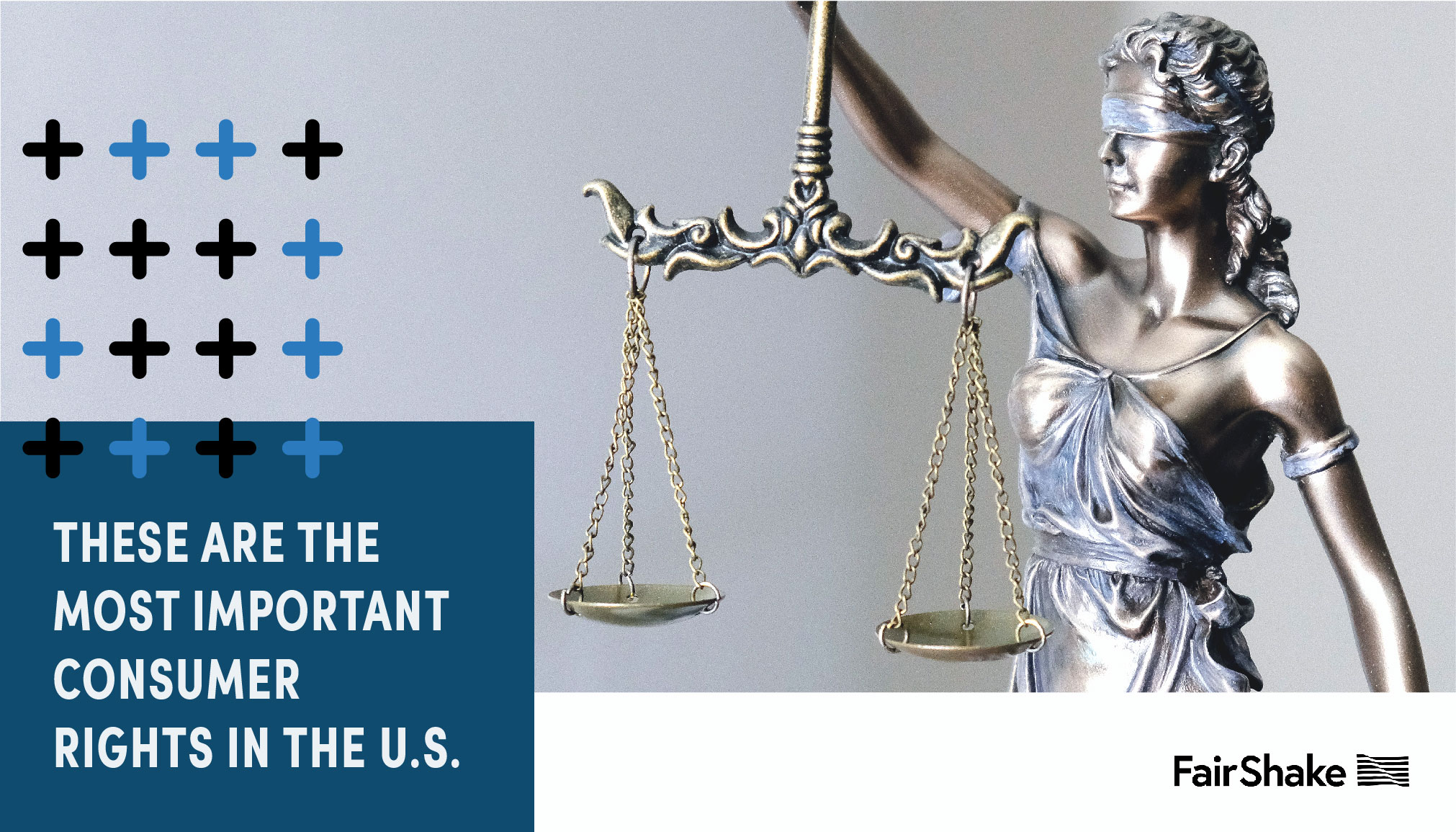 When it comes to consumer rights, Americans are protected by a pretty complex series of federal laws.

We are pretty well protected against unfair or deceptive practices by businesses. The same goes for protection against harmful ingredients in food, drugs, or makeup, or products that might cause us injury or harm. Financially, Americans have decent federal protection, including laws that regulate credit reporting, debt collection, and lending so it’s all fair and not false or predatory.

But the problem with having 50 different states (plus Washington, D.C.) is that you get 51 different sets of consumer protection laws. They’re not all the same, and while some states have laws that fill those gaps left by the federal government, other states have weak laws that don’t actually offer consumers a lot of extra protection.

Which states should be held up as examples to the rest? We have all the details on that — and what consumers need to know about how to protect their own interests, no matter what state they call home.

State Attorneys General: A Resource in All 50 States

A resource available in every U.S. state that helps protect consumer rights is a state attorney general. According to the National Association of Attorneys General, these elected and appointed officials serve as “chief legal officers of the states, commonwealths, and territories of the United States.” They also “serve as counselors to state government agencies and legislatures, and as representatives of the public interest.”

In other words, they work for the public and the government to protect both from wrongdoing by businesses and other private interests.

By law, a state attorney general typically can’t represent a private citizen in a legal case.

However, private citizens can make reports about consumer protection law violations, and state attorneys general can then file lawsuits on behalf of their states against businesses that engage in illegal or unscrupulous practices.

The reality is that state’s have a varying patchwork of laws that offer different levels of protection to consumers.

How Consumer Rights Laws Vary from State to State

Consumer rights laws exist in all 50 states. But the amount of protection they offer depends on each individual statute, local court cases, and legislative priorities.

According to the National Consumer Law Center, the “backbone of consumer protection in every state” should be the state’s Unfair and Deceptive Acts and Practices (UDAP) laws. These are the laws that “prohibit deceptive practices in consumer transactions and, in many states, also prohibit unfair or unconscionable practices,” according to the NCLC. Every state has UDAP laws on the books, but their effectiveness varies wildly.

In many states, legislation or court cases have narrowed the scope of UDAP laws, or added exemptions for certain industries or types of transactions. Other states have limited how officials are able to enforce UDAP laws. Some states have limited fines for UDAP violations to incredibly low amounts. Some have even shifted the financial burden of enforcing UDAP laws to consumers, making them pay fees to take businesses to court over UDAP violations.

But in some states, UDAP statutes are strong and give consumers robust protections against unscrupulous businesses. These are the states that offer the strongest UDAP protection in the country. Hawaii is named by the NCLC as one of the state’s with a particularly strong collection of UDAP laws. Hawaii’s UDAP statutes broadly prohibit companies from engaging in any unfair or deceptive acts. They also give state consumer protection offices the authority to adopt new rules to address emerging scams, which means Hawaii’s consumer protection officials are able to continuously adapt to the best ways to protect their consumers from modern challenges.

While many states have come under fire for writing exemptions for certain lobbying industries into their UDAP statutes, Hawaii is not one of them — the state does not carve out any industries as being exempt from following its UDAP laws.

Massachusetts is another state the NCLC points to as an example for strong UDAP legislation. The state’s UDAP laws broadly prohibit unfair and deceptive acts by businesses, without any significant exemptions for industries. The law in Massachusetts also gives the state attorney general the authority to create rules defining unfair and deceptive acts. The law also allows consumers to obtain injunctions, damages, multiple damages, and attorney fees from businesses found in violation of UDAP statutes.

Connecticut’s UDAP laws mostly share the strengths of the laws in Hawaii and Massachusetts: They broadly prohibit unfair and deceptive acts and practices, like they’re intended to do. Unfortunately, there are a few ways Connecticut’s laws are lacking. Attorney fees aren’t guaranteed for consumers who win court battles against businesses who violate the state’s UDAP laws. Connecticut is also criticized by the NCLC for giving insurance companies some significant exemption from its UDAP laws.

In Vermont, consumers are relatively well protected by state UDAP laws. The state’s UDAP statute provides broad protection against unfair and deceptive acts and practices, and similar to the Massachusetts statute, Vermont’s attorney general is given the authority to create rules as needed to prohibit new and additional kinds of unfairness and deception. Like Connecticut, though, Vermont has exemptions in place so that its UDAP laws don’t apply to unfair or deceptive practices by insurance companies in the same way they apply to other industries.

Rounding out the top 5 states for robust UDAP laws is Illinois, where state statute includes both broad and specific protection against unfair and deceptive acts and practices. Illinois is another state where the attorney general has the ability to adopt new rules to target emerging scams and specify new types of unfair and deceptive acts. However, what keeps Illinois from ranking higher is that court decisions have created exemptions for creditors and credit transactions, which limits the state’s UDAP law protections against things like predatory lending and mortgage fraud. One area where federal lawmakers have been extremely slow to act is in data protection and online privacy. The U.S. currently has no federal-level data privacy laws or data security laws, putting it well behind places like the European Union, which implemented the landmark General Data Protection Regulation in 2018.

What that means for American consumers is that, for the most part, there’s very little regulation about how companies can collect and use their personal data. There are some exceptions to this, of course — we have federal laws that limit how banks and financial institutions can use their customers’ data, for example, and the Children’s Online Privacy Protection Act allows parents to control what data is collected online about kids under the age of 13.

For adults in most states, though, that’s as far as federal regulation goes. There are no consistent and uniform federal protections that regulate how our data is collected and used.

Where the federal government has failed, though, innovative states have begun to step in. Here’s how states are working to fill the gaps in federal law when it comes to data privacy and security.

California was the first state in the U.S. to enact its own legislation to fill gaps in data privacy law left by national lawmakers. The California Consumer Privacy Act of 2018 was a landmark piece of state legislation that secured new privacy rights for California residents. Among the law’s many provisions, it gives Californians the right to:

The CCPA also requires businesses to provide consumers with certain notices that explain their privacy practices. Businesses cannot make Californian consumers waive any of the rights afforded to them under the CCPA.

Since California passed and enacted the CCPA, other states have tried, largely unsuccessfully, to follow suit with similar legislation. The only state that has passed a similar data privacy law so far is Nevada. Virginia, Florida, New Hampshire, Washington State, and Illinois have all considered similar legislation, but proposed laws have so far failed in those states.

Are Laws the Only Protection Consumers Have?

When the law leaves gaps that fail to protect consumers from shady or unscrupulous businesses, they have to know how to protect themselves.

One avenue for consumers to seek justice when businesses do them wrong is consumer arbitration, and we’re here to help guide consumers who have chosen to take that path.

Ready to get your fair shake against a big business that isn’t playing by the rules? See how FairShake can help today.

Why is Online Privacy Important? A Starter’s Guide to Protecting Yourself on the Internet