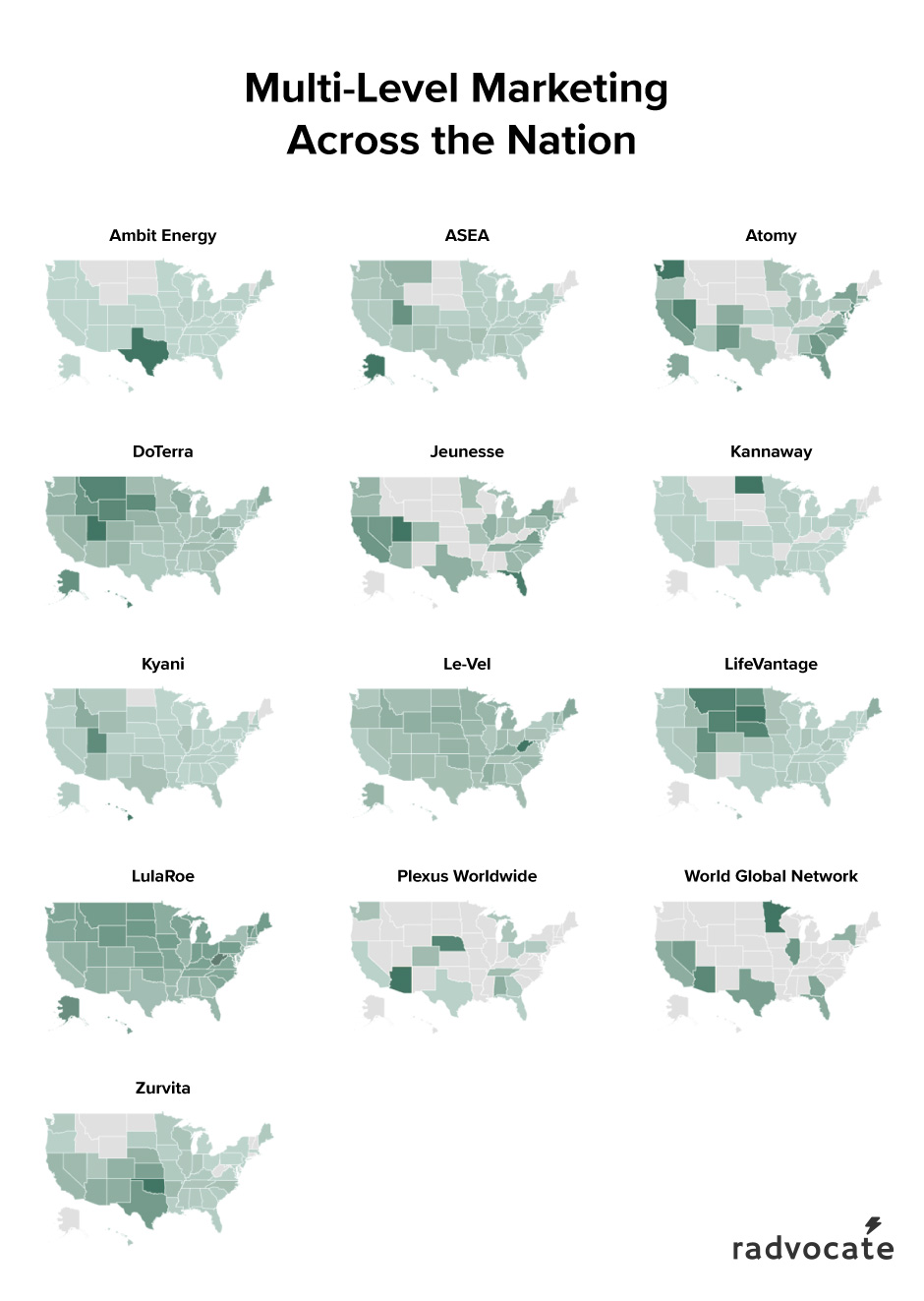 How the fastest-growing MLM’s have conquered the US

Most of us have gotten the Facebook messages, party invites, and the invitations to join social media groups. Nearly all of us can think of someone who works for a multi-level marketing company, and uses their online presence to try to sell products to family, friends, and strangers.

Multi-level marketing (or MLMs, also called direct sales) is an industry that allows anyone to sign up to become a “distributor” of a product — someone who leverages their own personal networks to try to sell the product for the company that owns it. Often, network marketers are required to purchase products themselves at wholesale or slightly discounted prices, then try to sell them.

And MLMs can be big business: By our estimate, over 10 million Americans were pitched to join an MLM this past year. 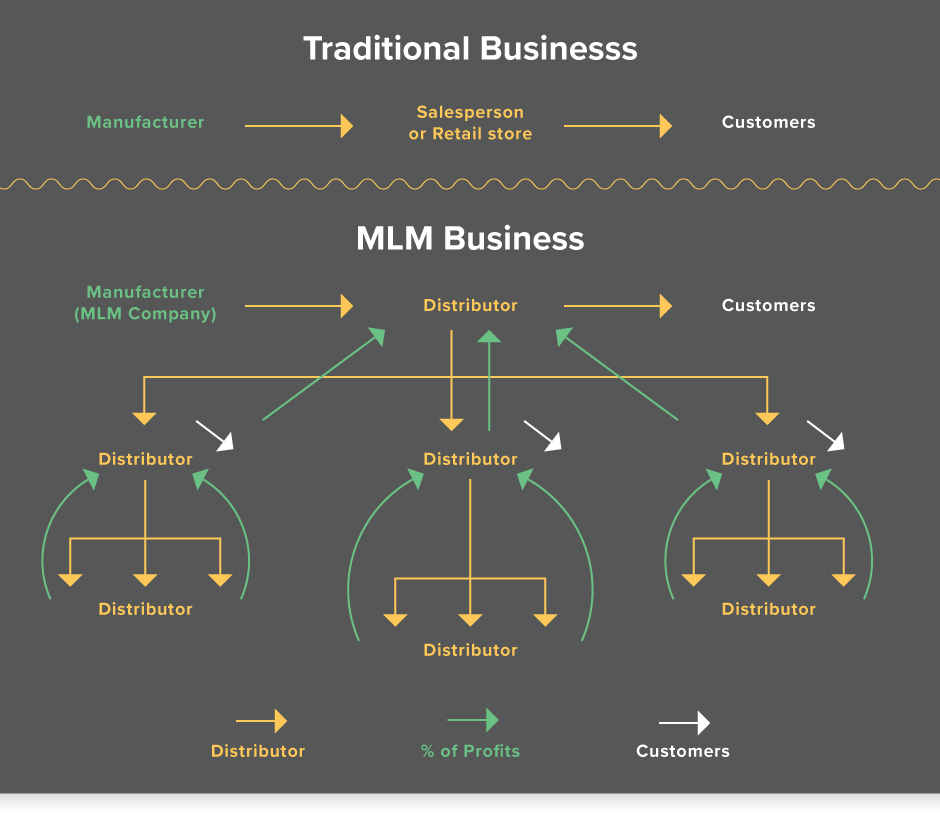 But what makes MLMs so controversial is that distributors are also encouraged to recruit other distributors to work under them, often netting a portion of those new distributors’ sales in addition to their own commissions.

There’s a lot of debate over whether multi-level marketing companies provide people with a legitimate way to make an income, or if they’re something more sinister. A look at any direct sales company’s income disclosure report will reveal that a very small percentage of company representatives make enough money to support themselves, and an AARP survey last year found that 73 percent of MLM distributors don’t even make enough to break even.

While these companies pitch a lifestyle of earning good money while you stay home with your kids or working from your phone while you travel the world, the reality is that most direct sales companies, because of their recruitment-based structure, only offer a very limited number of opportunities for people to earn big money. For most MLM companies, those opportunities go to the first handful of people to join, so they’re long gone by the time you hear about the company.

Still, the MLM industry is booming, with 6.2 million people selling products and recruiting new distributors in 2018. Those sales people sold products to 36.6 million customers that year. Overall, the industry generates $34.9 billion in revenue each year in the U.S.

The industry is growing, despite all its controversy, and the biggest MLMs in the U.S. are always open to recruiting new sellers in new places. That’s why we wanted to see how some of the most popular MLMs have spread across the U.S. as they’ve grown.

Using Google Trends data, we analyzed web searches for 13 of the top new MLMs in the U.S. All of these companies were founded after 2006, so web searches paint a decent picture of how they’ve grown and spread to new parts of the country. Here’s what we learned.

Ambit Energy is a little bit different from other companies on this list, in that it sells electricity and natural gas services and can only operate in areas where energy markets have been deregulated. Founded in 2006, it’s based in Texas, which you can easily guess from looking at the company’s search volume over time.

Searches for Ambit Energy have stayed consistently high-volume in Texas, with moderate searches in almost all other U.S. states.

Mapping search trends for ASEA shows interest in the company primarily began in coastal states, but has steadily moved inland. There are now searches for ASEA registered in almost all U.S. states.

Atomy is the only international MLM on our list. Founded in South Korea in 2009, it markets something Korea is particularly known for: skincare products. Despite being based abroad, though, Atomy has developed quite a footprint in the U.S.

Searches for Atomy show interest in the company is pretty heavily concentrated in coastal states, but beginning to creep further inland as word about the company spreads.

DoTerra launched in 2008 and is currently headquartered in Pleasant Grove, Utah. This MLM sells essential oils that are marketed for aromatherapy, cleaning, and more.

DoTerra is also one of the most wide-spread MLMs on our list, with searches in all 50 states and particularly high search volume in the mountain west states that surround its home state of Utah.

Founded in 2009 near Orlando, Florida, Jeunesse is yet another health and wellness company. One of its most popular products in a fruit-flavored gel that it claims delivers a boost of antioxidants.

Jeunesse’s search volume has been mostly concentrated in coastal states, and while searches for the company have been shown in a few inland states, it’s mostly middle America where people don’t search for Jeunesse at all.

One of the newer MLM companies on our list, Kannaway was founded in 2014 in San Diego, California. Kannaway has taken full advantage of the wave of pro-marijuana legislation in recent years by offering what it brands as “cannabis wellness products.” This includes oils and salves made from hemp and CBD. Kannaway is owned by parent company Medical Marijuana, Inc.

Founded in 2007 in Idaho Falls, Idaho, Kyäni is yet another MLM company that sells health and wellness products, including dietary supplements and a skincare line.

Searches for the company started out with high volume in Idaho, where Kyäni was founded, and have since spread out to moderate search volume in nearly all U.S. states.

Le-Vel was founded in 2012 and is now based in Frisco, Texas. The company is sometimes better known as THRIVE, which is the name of the line of health and wellness products it sells.

This is one of the most ubiquitous MLM companies on our list, with at least some search volume in all 50 states. It has a particularly strong presence in Middle America, including many midwestern and mountain west states.

LifeVantage was created in 2006 after formerly operating under the names LifeLine Therapeutics, Lifeline Nutraceuticals, and Yaak River Resources, Inc. Based in Utah, the company sells an herbal dietary supplement that’s been at the center of a significant amount of controversy. The company’s founders were sent a warning letter from the FDA for claiming the product could cure ailments ranging from diabetes to cancer.

Since its beginning, LifeVantage has had a strong search presence in its home state of Utah, as well as a handful of surrounding mountain west states. But searches for LifeVantage have been seen in almost all U.S. states by 2019.

LulaRoe is one of the most infamous MLM companies on our list. Founded in 2012 by Deanne Brady and Mark Stidham, the company’s leggings (and later other clothing items) gained a cult following. Over time, though, LulaRoe struggled to keep up with growth and demand, and as the quality of its product diminished, the company became plagued by legal troubles.

LulaRoe’s nationwide spread began in California but quickly moved outward. Today, searches for the company can be seen with moderate search volume in all 50 states.

Arizona-based Plexus Worldwide was founded in 2006 by two former distributors for other MLM companies. Plexus sells weight-loss drinks and supplements.

Searches for Plexus throughout its 13 years in business have been pretty sporadic, first staying concentrated in Arizona and a handful of southeastern states, then spreading to other parts of the country without any discernible path.

Unsurprisingly, World Global Network has maintained a strong Google presence in Florida since it was founded. In the eight years it’s been in existence, though, searches for the company have stayed largely limited to the same handful of states.

Zurvita, founded in 2008 by Mark Jarvis, is a Houston, Texas-based wellness company that sells products it claims will energize and revitalize users.

Unsurprisingly, Zurvita’s early searches were concentrated in Texas and its surrounding southern states, but in recent years, people have been Googling Zurvita in almost all U.S. states.

As you can see, searches for most of the MLM companies are pretty widespread across the country today. The companies that aren’t being searched for in all states are, for the most part, still growing and expanding.

Despite the controversy that surrounds it, the direct sales industry shows no signs of slowing down. Understanding how these companies work and spread is a great first step to protect yourself from any shady business practices, and if you’ve been burned by an MLM, know that you have options to fight back.