The Most Hated Internet Service Providers in Every US State In 2013, the American Consumer Satisfaction Index (ACSI) included ISPs on its yearly consumer survey for the first time. That year, internet providers came in dead last out of all the 43 industries ACSI surveys consumers about—behind airlines, the postal service, and even health insurance providers.

Struggling to get your ISP to resolve an issue?
Let us help.

Sure, that was seven years ago. But more recent data isn’t much better. ACSI’s 2018-2019 Telecommunications Report shows ISPs are still the companies that rank lowest in customer satisfaction out of all the industries it studies. And what’s even worse is that ISPs are still at the bottom after consistent year-over-year growth in their customer satisfaction scores. While ISPs are providing better service than they used to, they’re, as ACSI put it in its 2019 report, “still falling short of providing good service at an affordable price.”

If ISPs are doing such a bad job satisfying their customers, it’s vital for consumers to pick a service provider who will provide them with the least amount of headache. But how do you know which providers to contract with—and, more importantly, which ones to avoid at all costs?

That’s where we come in. FairShake has determined which ISP is the most hated in every U.S. state—AKA, the ISPs you should stay away from, depending on where you live. We know most people don’t have a lot of choices when it comes to their ISP, but this guide should help avoid the real worst of the worst—or at least help consumers learn how to better protect themselves against companies that have a reputation for letting their customers down.

A lot of customers come to us claiming that theirs is the worst internet provider, so we wanted to look at the data. We discovered the most hated ISP in each state by researching, analyzing, and combining data from a few different sources.

Some of this comes from an analysis of proprietary FairShake data, including web traffic and inquiries about how to fight back against ISPs when their customer service departments fall short.

From those two data sources, we were able to get a pretty good idea of which ISP company customers in each state received the most complaints. 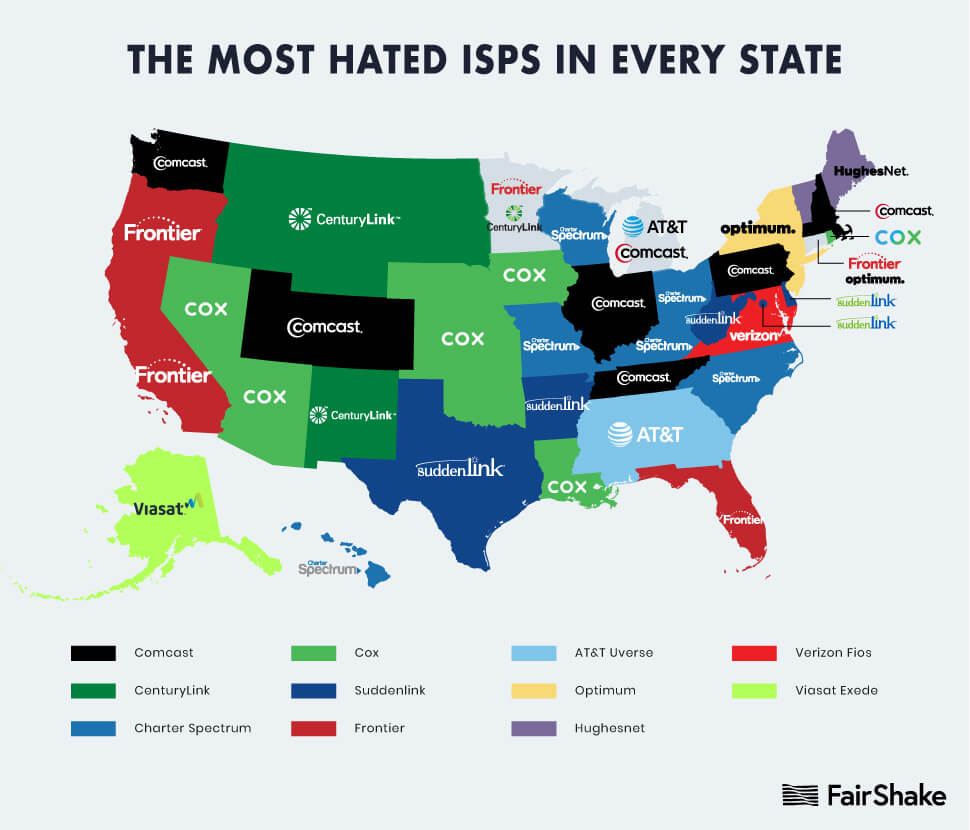 These Are the Most Hated ISPs In Every State

While the complaints against these ISPs are varied, there are definitely some trends. Some common problems customers tend to report with their ISPs are billing problems, deceptive pricing, misleading sales tactics, poor service, and slow speeds.

Each company is different, though, so let’s take a look at all the ISPs that made this list. Coming in at No. 1 in a whopping 10 different states, Comcast might just be the most hated ISP in the country. If you have a complaint against Comcast, you’re far from alone—just ask the hundreds of people whose reviews have netted the company a one-star rating on Yelp.

If you have a complaint against Comcast and are struggling to get resolution, you have more options than just making yet another fruitless call to customer service. Learn more about how you can file a legal claim against Comcast here. Compared to other ISPs that were most hated in multiple states, Cox has a relatively low number of one-star reviews on Consumer Affairs. On Yelp, though, Cox has a one-star review from more than a thousand customers who have taken issue with the company’s billing practices, misleading promotions and sales tactics, poor service, and other issues.

It’s also been reported that Cox employees have been incentivized to create fake accounts for their customers—sometimes as many as five to seven false accounts per customer.

If you’re seeking justice against Cox and the company’s customer service isn’t helping you, we can. See here how you can take on Cox and get resolution. CenturyLink has, by far, the most one-star Consumer Affairs reviews on this list, with nearly 4,000 dissatisfied customers who rated the company that poorly. Some common complaints Consumer Affairs reviewers had about CenturyLink? Poor customer service, phone systems that make it nearly impossible to get a human on the line, high prices, and internet service that clocks in at speeds just a fraction of what users pay for.

Going up against a company like CenturyLink can feel like a modern-day David and Goliath story, but if you have a complaint that you can’t seem to get resolved by dealing with the company itself, we can help you here. 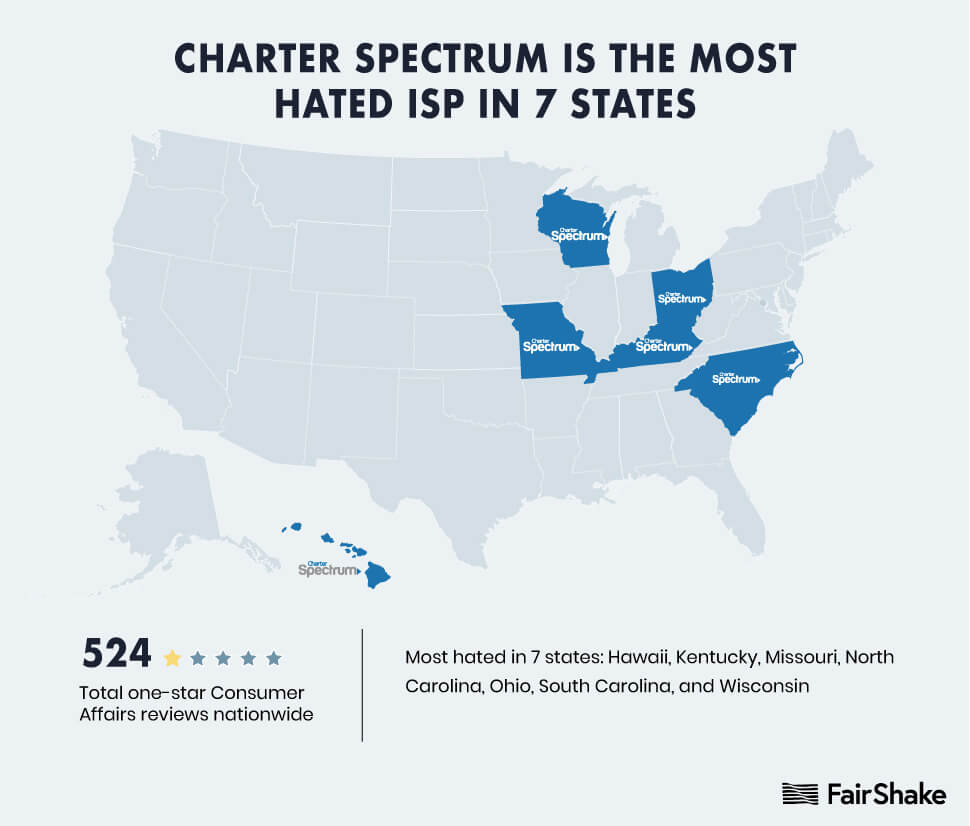 Charter Spectrum’s Consumer Affairs reviews are 89 percent negative, with customers complaining of misleading offers, incorrect billing, bad customer service, and so many other issues. The company’s internet service is available in 41 states, which means Charter Spectrum has a huge potential pool of customers to leave frustrated and dissatisfied with their service.

That’s why, if you have a complaint against Charter Spectrum, you should know you’re definitely not alone. When Charter Spectrum’s customer service fails to get you a resolution that feels right, we can help. Frontier isn’t quite as large or widespread an ISP as some of the major players on this list, but that didn’t stop it from being the most hated internet provider in five different states. With 532 Yelp reviews, Frontier has just a one-star rating, thanks to customers who take issue with the company’s automated phone system for customer service, high cost, and deceptive price quotes, which some customers say include just the cost of the service, but not the taxes and fees they ended up having to pay as well.

Many customers may want to make a claim against Frontier, but not know how or where to start. We’ve got you. Learn how you can fight back against Frontier’s customer service here. 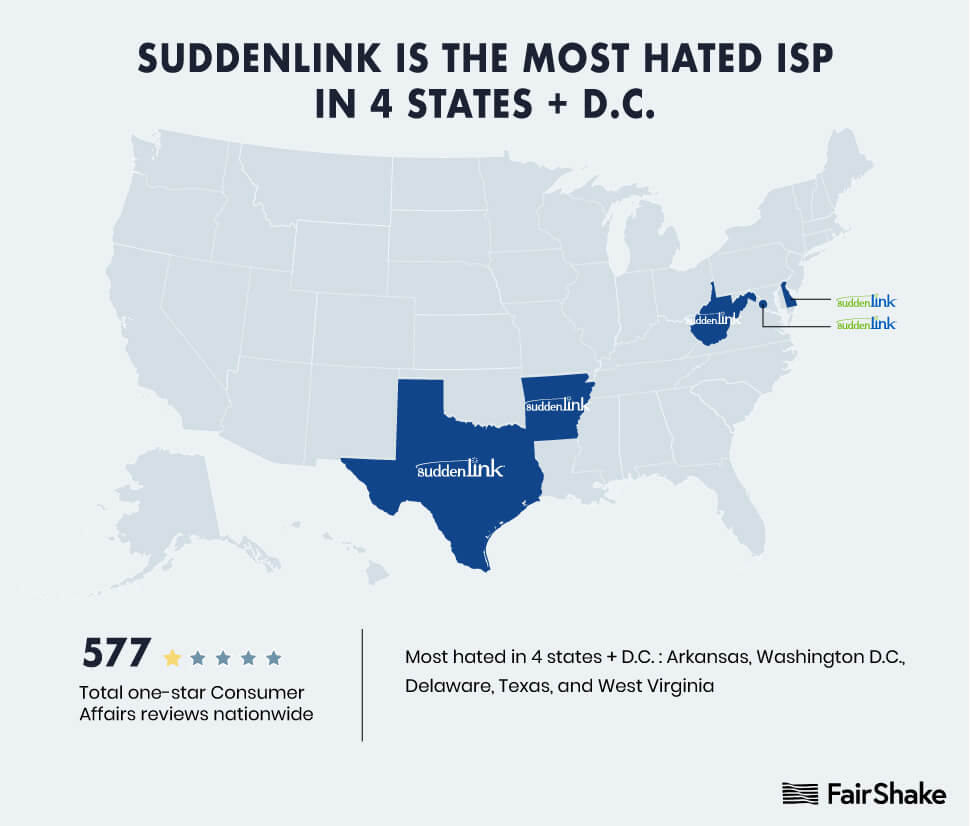 Most hated in 4 states and D.C.: Arkansas, Delaware, Texas, and West Virginia, plus Washington D.C.

Customers who have left one-star reviews for Suddenlink on Consumer Affairs repeatedly point to poor customer service, slow service times, and absent communication as reasons for being so dissatisfied with their ISP service. Multiple customers reported being charged late fees when they paid their bills on time, or being charged for more expensive internet plans than what they actually had.

If you have a complaint against Suddenlink and are struggling to get it resolved, consumer arbitration might be the right next move. See how we can help here. Most hated in 4 states: Alabama, Georgia, Michigan, and Mississippi

AT&T Uverse is well-known for leaving dissatisfied customers in its wake. With over a thousand reviews, AT&T Uverse has a one-star Yelp rating, with reviewers citing problems with their billing practices, misleading promotions and sales tactics, poor service, and other issues.

CBS has reported that some AT&T customers have been charged as much as three times the rate they were promised. Those reports prompted one lawyer to call AT&T Uverse’s contracts “a license to steal.” Yikes.

If you have a complaint against AT&T that customer service can’t or won’t resolve, you’re far from alone. See how you can get help here. With 754 one-star reviews on Consumer Affairs, Optimum is the most hated ISP in three different U.S. states. Combine that with its hundreds of Yelp reviews that give it an average rating of just one star, and you’re starting to see the big picture: A lot of unhappy Optimum customers.

Optimum has even made the news for its allegedly shady practices—one report found that hidden fees could make a recent internet promotion cost nearly double its advertised price.

If you have a complaint about Optimum and feel like you’re just not being heard by the company or its customer service, we can help. Find out some possible next steps for escalating your complaint against Optimum here. Most hated in 2 states: Maine and Vermont

Total one-star Consumer Affairs reviews nationwide: 2,579Despite being the most hated ISP in only two states, Hughesnet has racked up a whopping 2,579 one-star reviews on Consumer Affairs. Reviewers point to customer service promises that lead nowhere, internet speeds far slower than advertised, and service outages as just a few of the reasons they’ve left so many poor reviews for this company.

Looking for help getting Hughesnet customer service to take your complaint seriously? We can help. 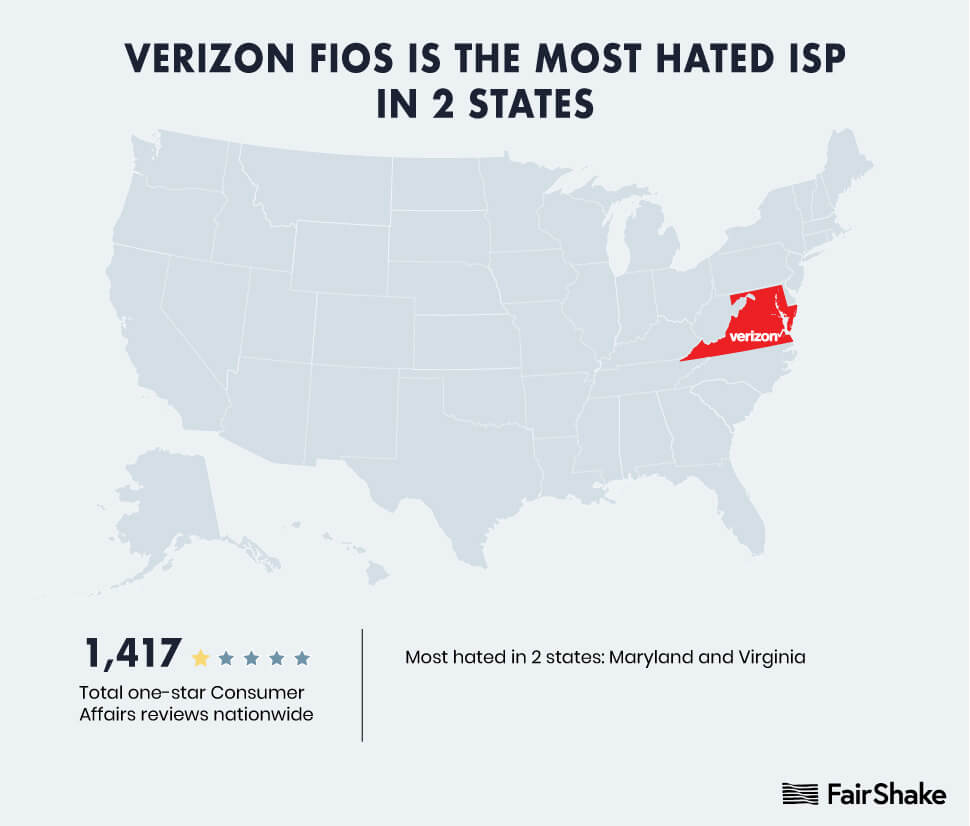 Most hated in 2 states: Maryland and Virginia

Fios, Verizon’s fiber optic internet service, has only been widely available since 2010. But that hasn’t stopped this provider from building a reputation for letting its customers down. 1,417 one-star Consumer Affairs reviews show just some of the problems customers have with Fios.

On top of that, Verizon has been criticized for allowing its internet infrastructure to fall into disrepair, resulting in slow internet speeds for millions of customers. If you’re an unhappy Verizon Fios user, you’re not alone, but you do have options. Find out how to get help getting justice here. Most hated in 1 state: Alaska

Customers who left one-star reviews for Viasat Exede pointed to slow internet speeds, frequent outages, and usage caps as just some of the reasons they were so dissatisfied with their service. Multiple customers claimed the company sold them on “unlimited” usage plans that actually throttled their internet speeds after just 150 gigs of use. Exede contracts include a clause that states customers can only sue the company in small claims court. Not sure how to begin that process? We can help, and also help you explore consumer arbitration as an alternative here.